Ted Keenan had passed away in 2013. The living four inductees agreed an approach, “Grandfathered” themselves into the Ireland Marathon Swimming Hall of Fame, generated a list of nominees and voted for the Class of 2018 Inductees.

Chris began his open water swimming career in Surf lifesaving and quickly began to travel and compete in the big open water races in Ireland in his teens. In 2010 he became the first Irishman to qualify for European Open Water Championships in Budapest, where his international competitive career went from strength to strength. Chris qualified for every senior Irish squad at European and World Championship level since 2010; competing in the 5 km, 10 km and 25 km marathon open water events. He achieved multiple European 5km and 10 km cup victories. In World Championships he placed 8th at 5 km in 2011 and 16th at 10 km in 2013.

Chris had the privilege of training in Ireland’s first established swimming performance centre in the University of Limerick under the guidance of numerous internationally recognised coaches over a period of ten years.

Lisa was the first swimmer from Ireland to complete an over and back English Channel swim 42 miles/68 km swim in 2009 in 35 hours. Amazing it was only her second epic marathon (after Blackrock to Cobh 8.1 miles/13 km in 2008), the first woman and second swimmer ever to complete this before swimming a one-way English Channel.

She contributed over the years locally as a swim organiser, crew and volunteer including Sandycove Island Swim Club – committee and webmaster and International Marathon Swimming Hall of Fame – webmaster.

Amazingly Kieran trained in the Sligo Park leisure Centre 15 meter pool during the week and on weekends would travel to the Mount Errigal Hotel 20 meter pool in Letterkenny.

He also contributed over the years as a swim organiser and volunteer. Kieran started the Lough Gill Swim, with Paul McGarry, after seven years now runs with a committee of 13, and raised over €185,000 for the North West Hospice. He crewed for Anne McAdam, Shay Dillon, Ciaran Cassidy and Feilim O’Maolain for their six hour qualification swims in Lough Gill, before they swam the English Channel. Kieran crewed for Anne-Marie Ward on her successful English Channel and North Channel swims leading up to her selection as the WOWSA female swimmer of the year. Finally, he was a mentor for Stephen Redmond on his English Channel swim – his first as he ramped up for the Ocean’s Seven campaign.

Jack was the leading Irish marathon swimmer during the mid 1950s to late 1960s. He was a superb athlete: turned down a professional football contract with Arsenal, weightlifter and wrestler (professional under the alias J Raymond the Belfast Bulldog).

He participated for six years in the Butlin’s Cross Channel Races across the English Channel with the greatest marathon swimmers of the era. In 1956, he was the last to leave the water in terrible conditions in 11 hours and 4 minutes and was declared joint winner with International Marathon Swimming Hall of Fame (IMSHOF) Honor swimmer Tom Park who retired in 10 hours and 20 minutes. Jack never completed the swim:  1954 15 hours and 45 minutes, 1955 12 hours and 5 minutes, 1957 boat failed to show, 1958 more boat issues after 10 hours and 10 minutes and 1959 failed to start.

He also competed in the 1957 race when again the conditions were terrible and only two swimmers finished with IMSHOF Honor Swimmer Greta Andersen winning and finishing in 13 hours 53 minutes. Jack never completed the English Channel crossing despite receiving another slot in the 1959 race.

His other marathon swims included a number believed to be first ever: Carrick to Bangor in 1958, Lough Neagh in just under 18 hours (following IMSHOF Honor Swimmer Commander Gerald Forsberg as the second swimmer to complete) in 1959, Rathlin Sound (from Rue to Ballycastle) in 1959 in 3 hours 10 minutes – first man, Strait of Gibraltar 8.9 miles/14.4 km in 1961 (first Irish swimmer), Galway Bay (Blackhead Clare to Salthill Galway) -in 1964 in 7 hours, Tory Island to Mainland 7 miles/11.3 km in 1968, Blaskets Island to Dunquin in 1969 and Tralee Bay.

Jack’s great disappointment was never completing the North Channel. He fell short with a headline-grabbing attempt in 1959. That same year, his friend, IMSHOF Honor Swimmer Jason Zirganos, died after an unsuccessful attempt.

He also contributed over the years as President of the Irish Long Distance Swimming Association and obtained the sponsorship required in 1979 for a relay swim to the Isle of Man to celebrate the 1,000th year of unbroken parliamentary rule.

Deirdre has completed more English Channel 21 miles/34 km crossings (four) than any swimmer from Ireland – including an over and back 42 miles/68 km swim:

Deirdre learned to swim, trained and competed as a member of St Pauls Swimming Club in Dublin until she left Dublin in 2002 to live in London.

Eilis is the most successful marathon swimming coach in Ireland and had a tremendous influence in County Cork achieving a count of 149 local marathon swimmers. She coached almost all of the 34 Cork based 25 km+ marathoners. This includes more than 20 of the English Channel soloers from 2005 to 2017. Eilis also coached aspiring Maura Twoney from Boston to channel solo success.

She coached many of the other Cork marathoners though her years at Source Fitness, Cork Masters and some from the age of 3.
Eilis didn’t take pay for her English Channel coaching – rather she insisted that her swimmers raise charity funds – which exceeded 100,000 euro.

She is a marathon swimmer in her own right with a wetsuit solo from Formigues Illes to Medea (Spain) 13.9 miles/22.3 km in 2015. Eilis also completed (in skins) the earliest marathon swim recorded in County Cork: Blackrock Village to Cobh 8.1 miles/13 km in 1973.

Martin was a prolific marathon organiser, observer, crew, reporter and administrator in every Irish Province to Dover.
He led the acceleration of marathon swimming at the turn of the century Ireland. From 1990 to 2004, there was an average of one English Channel solo success a year (19 in total). Martin made major contributions that had long-term impact in Ireland: organized eight channel relay teams in 2004 and 2005, started the 8-mile Inishbofin Island Challenge 8 miles/12.8 km which he also soloed and Killary Harbour race 12 mile/19.3 km, organised a Channel dinner in Dublin Castle in 2001 and led the way in generating media attention. Part of his legacy is the increase of English Channel soloers from Ireland at an average rate of more than seven per year since 2005 (81 in 11 year for a total of 100 to date) .

Martin also swam in the 2004 and 2005 relays with his daughter Lucy and is revered as one of the fathers of Cork marathon swimming. Martin passed away in 2016.

Brian has the longest period of service as crew* and pilot for North Channel crossings. Since 1972 he has been part of 64 attempts. His swimmers include many International Marathon Swimming Hall of Fame inductees: Ted Keenan*, Rohan Dattatrey More, Kevin Murphy*, Anna-Carin Nordin, Stephen Redmond and Alison Streeter MBE. As a pilot, Brian’s swimmers set many records while helping to establish the Irish to Scotland route: first female, first relay, first American, first from the Southern Hemisphere and first from India. For the Scotland to Ireland route the records included: first female, first male and first male from Ireland.

Between 1989 and 2009 Brian was the only active pilot. With the increased popularity of the North Channel as part of the Ocean’s Seven other pilots have been added with Brian continuing with up to three solo swimmers each season – more for the experience and enjoyment as opposed to a commercial venture.

Quinton’s first piloting assignment of the North Channel was in August 1988.  Margaret Kidd (now Margaret Gibson) from Scotland set the record (which still stands) as the youngest swimmer and missed by just 1 day being the first female ever to complete the North Channel.  One year later he piloted IMSHOF Honor Swimmer Kevin Murphy who completed the first ever swim Scotland to Ireland.

Quinton took a break from piloting until requested to resume in 2012 due to increased Oceans Seven popularity.  He had experimented with a new route in the 1980s and now refined it using modern technology. It has helped to significantly increase the percentage of successful swims and his total now stands at 23 successful crossings.   Quinton helped four other swimmers set records: Fergal Somerville, Ireland, in June 2013 the earliest in any season in 12 hours and 21 minutes; Michelle Macy, USA, in 2013 the fastest overall in 9 hours and 34 minutes; Milko van Gool, Netherlands, in 2013 the fastest male in 10 hours and 34 minutes (record since broken) and Pat Gallante-Charette, USA, in 2017 the oldest female. 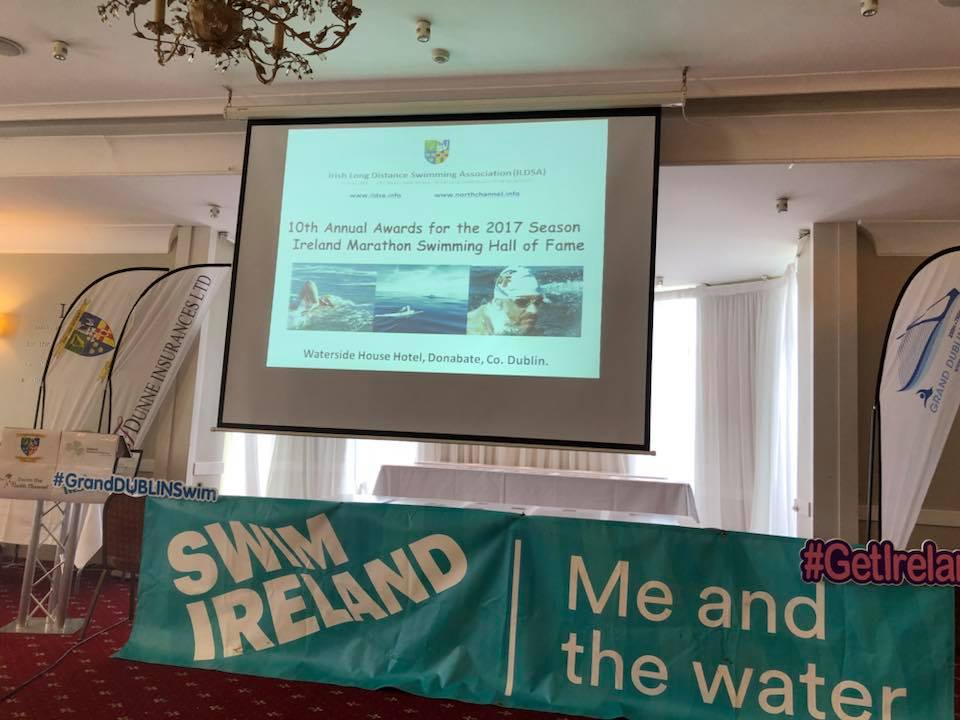 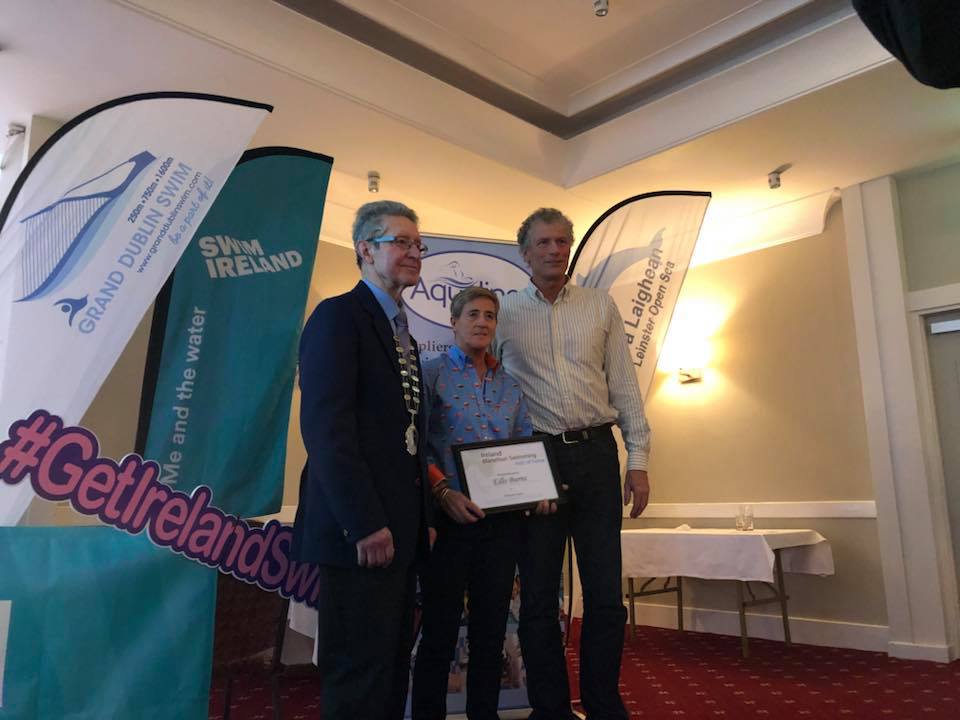 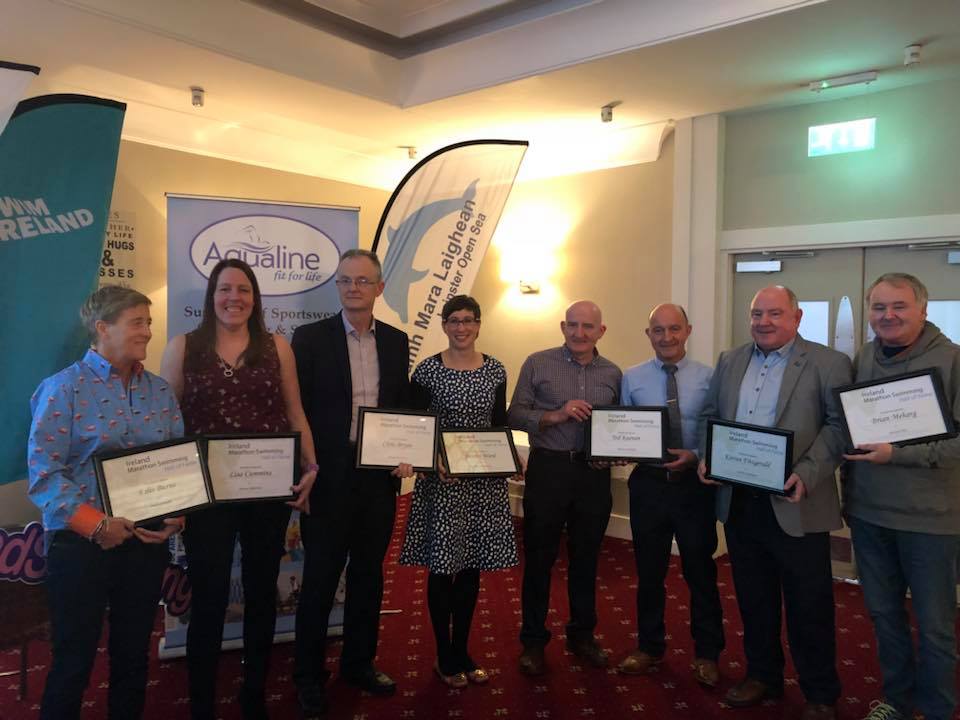 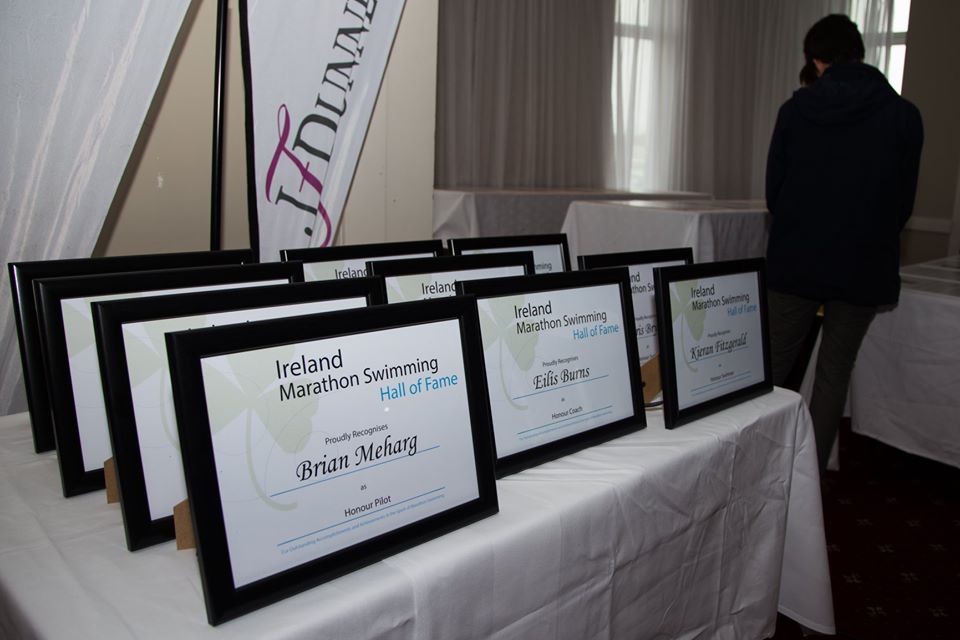