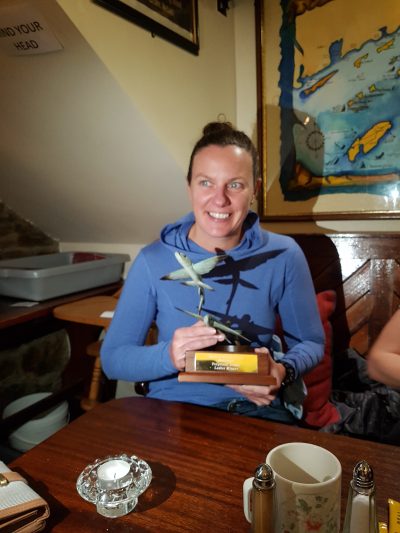 She has pioneered (first ever swimmer – or swim group) an incredible 11 new marathon courses:

Carol currently serves as the Chair of the Sandycove Island Swim Club and has been one of the most active swim organizer/volunteer – example 6 times crewing for others in the English Channel. 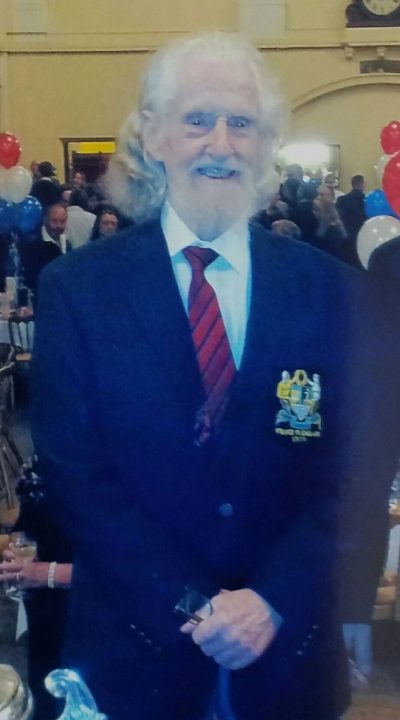 Ray took up long distance swimming in 1964 is now 87 years old and although born in Folkestone, Kent, first came to his native (and much beloved) Derry, 70 years ago where he was then based in Ballykelly. Ray was then a submariner “as was his lifelong friend, mentor and pioneer of long distance swimming, Commander Gerald Fosberg.

Ray went on to become a saturation diver and worked all over the world including the North Sea, The South China Sea and the English Channel.

Ray still claims to this day that he must be the only man living that, when it comes to the English Channel, he has ” worked at the bottom”; “Went by, train, Submarine, Plane, and swam it”

Ray also owns and would carry out salvage for many years on the wreck of the bullion ship, RMS Laurentic.

Ray was the first swimmer from Ireland to complete the English Channel in 1970 in 13 hours 41 minutes.  He led the way for all the others!  Ray completed other epic marathons:  Lough Swilly Buncranna to Portsalon 17 miles in 7 hours, Portrush to Greencastle 19 miles in 8 hours, Derry to Moville 20 miles in 6 hours and 51 minutes, Windermere 10.5 miles in 7 hours and 30 minutes and Lough Neagh width 9 miles in 6 hrs.

Ray also completed epics swims below the marathon distance of 10k which were historically important:  1964 to 1970 Lough Swilly, Rathmullan to Buncranna 5 Miles – 11 times and Rathlin Rue Point to Ballycastle.

Ray contributed to the sport for many years as the coach on the 1978 Irish under 16 channel relay team which broke the existing world record with a time of 8 hours and 40 minutes. This record would stand for a further 18 years.  In the same year Ray accompanied two of the team to Syria to complete in the 20k Jableh to Latakia swim. Ray spent a full year at this training and fund raising. This was a cross community team and the achievement was recognised In Dublin at a reception given in the American embassy attended by politicians across the political divide.

He is still also a Vice President of the Channel Swimming Association. 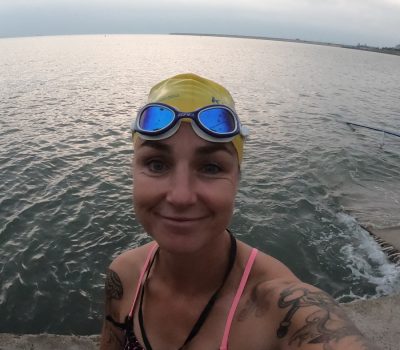 Rachael was the fastest female marathon swimmer from Ireland. Her 2016 English Channel solo set a new Ireland record and 9 hours and 40 minutes and remains the second fastest overall.   In 2009 she represented Ireland in the British Gas Great East Swim in England.  While only 1 mile it was important as it was assisted by a stipend by the race organisers and the first ever open water swimming grant from the Irish Sports Council.

She won the following competitions (beating all male and female swimmers):  2015 Champion of Champions on the Copper Coast (5 miles then 3 miles then 1mile race), 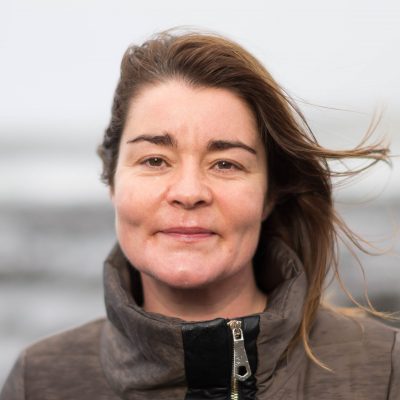 Fionnuala grew up swimming at Cappa, Kilrush, Co. Clare on the Shannon Estuary.  She is the first Irish Female and 89th individual in the world to complete the Triple Crown of Open Water Swimming by successfully completing the English Channel 2012, Catalina Channel 2013 and Manhattan Island Swim 2014.

In 2015 she set a new Irish record for the Strait of Gibraltar in 3 Hours and 30 minutes.  Together with International Marathon Hall of Famers Ned Denison and Liz Fry in 2016 they completed the first ever group marathon:  anticlockwise around Anacapa Island, Santa Barbara, California 18km.

In 2012 Fionnuala was Irish Long Distance Swimming Association Female swimmer of the year and won the Channel Swimming & Piloting Federation JLDSC award for the most successful swim against all odds.

Fionnuala was Swim Ireland Open Water Swimmer of the Year in 2015. 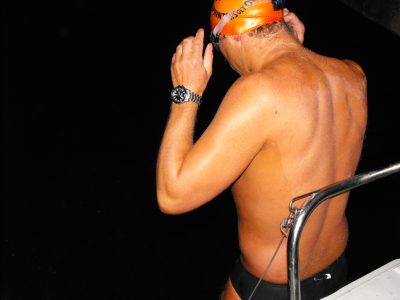 Donal’s personal blog, Loneswimmer.com, has been running well over ten years, passed over 2.5 million views and has been read in every country except Central African Republic, North Korea and Western Sahara. It is the most popular non-commercial open water swimming blog in the world (tag line: “the bible of cold-water swimming“) and has won the Irish Blog Awards twice, beating all the GAA, rugby and football sites.  Of note, this is where the first public questions/doubts (logic and dispassionate) were voiced against Diana Nyad’s Cuba to Florida claims.

Donal was also the co-founder of marathonswimmers.org. This is a leading swimmer-led forum, swim accreditation body and record listing website.

In addition, he was one of the co-authors of the global rules of marathon swimming, which allow any person, anywhere, who has no organisation, to run their own marathon swim so all can be recognised.

Through these three vehicles, Donal has greatly contributed to the explosion of marathon swimming globally and is highly regarded as one of the most influential voices from Ireland. 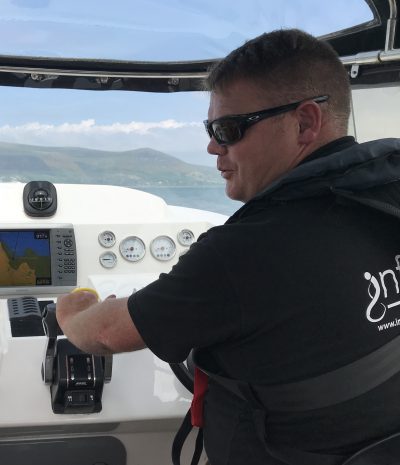 Channel Swimming
Founder of infinity Channel Swimming Ltd. (2014) offering pilotage and coaching for marathon distance swimming including the North channel.  Numerous successful North Channel crossings annually, 15 successful swims in 2019.  Open water swimmers from a global network, those aspiring to the Oceans Seven challenge and others taking it on as part of their personal plan. Pioneering new routes including the OA Channel and the Dal Riata Channel and Carlingford Lough swims.   Using new data and historical information and personal experience of marathon swimming to create more challenging open water swimming adventures.

HITtheWALL Ireland
Founder of HITtheWALL, an annual cold water endurance camp held in Carlingford, Ireland. Around 150 attendees annually from a global network.  Established in 2014 attendees have a limit pushing experience.  Each taking away snippets of Pádraig’s extensive open water knowledge.   Well supported water safety for those instils confidence in those taking their first 2k to those completing six and ten hour channel swim qualifiers.

Camlough Lake Water Festival (CLWF) Michael O’Hare 10K
infinity promote and sponsor this annual 10 kilometre race for aspiring channel swimmers to set their sights on.  Attendees from a local, regional and national areas compete in this event supported by CLWF Camlough Lake Water Festival Events Committee on which Pádraig sits as committee member.  Founded in 2009 with the completion of a Guinness World Record for the greatest distance open water swim in relay this festival runs annually with short and long courses for all ages.

ILDSA
Chairperson (2019 to present) Together as an All Ireland committee with Pádraig’s experience and leadership guiding, reshaping and improving open water swimming for Ireland, developing the North Channel services, collating the history of open water swimming in the four provinces and for Irish swimmer successes regionally and internationally.  Also providing a platform for open water events to source insurance, risk assessments and event procedures to grow open water swimming. 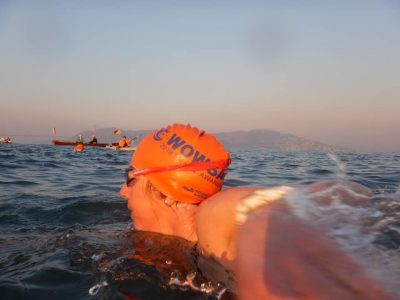 Jacqueline McClelland is known globally for her contribution to, passion for and promotion of swimming. She sees what needs to be done, problems that need to be solved, and actions them. She has been an inspiration to so many people here at home in Ireland and around the world. Her contribution to the swimming family will be felt for generations.

infinity Channel Swimming
Jacqueline is Co-Founder and Director of infinity Channel Swimming (2014) which provides piloting services for the North Channel and other channels.  As logistics manager, observer and crew member she has a vast experience of multiple North Channel solo and relay crossings, Isle of Man to Ireland, The Dal Riata Channel, Tory Island and Cook Strait New Zealand.  She was one of the lead organisers of the Wales to Ireland relay 2019 and a crew member of Oa Channel pioneering swim by the OA Giants 2020, a Guinness World Record swim. Her ability to gather the right team for the swim is proving fruitful.

HITtheWALL Ireland
Lead organiser and logistics manager of HITtheWALL cold water endurance camp since 2014. An annual cold water camp held in Carlingford, Ireland which attracts a global audience with a range of abilities to push themselves in cold water in a safe environment, including 6hr and 10hr qualifying swims.

infinity Swim Academy
Jacqueline is Co-Founder and Director of infinity Swim Academy where she is coach and swim teacher. Introducing the benefits of swimming from the age of 6 weeks and instilling the positive affirmations to bring what is learned in the pool to the open water with their learn here swim anywhere ethos. As a Swim Ireland flagship centre her focus with an amazing crew is the strive for excellence in teaching and coaching.