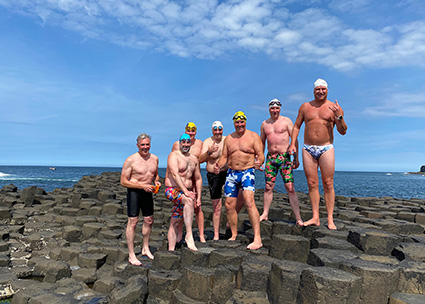 The Oa Giants relay team, already record-breakers after their stunning crossing of the North Channel on 2nd August 2020, a week later became the first to cross the Oa Channel between Scotland and the Giant’s Causeway in Northern Ireland.

The team, comprising Keith Garry, Dominic Mudge, Bill Donnelly, Chris Judge, Colin Lindsay and John McElroy, set out from Islay on 8 August and crossed the Oa Channel by relay, reaching Northern Ireland on Sunday 9 August with a final time of 16 hours and 57 minutes.

Congratulations to the team on another outstanding day (and night) in the water.